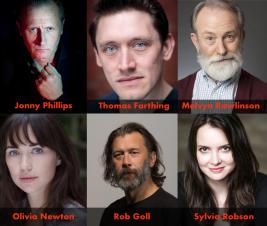 Hammer Films is a mainstay in British popular culture. The revival of the British gothic horror in the late 1950s, coupled with the iconic, indelible pairing of Christopher Lee and Peter Cushing, cemented the company's status as one of Britain's most renowned film studios. Yet for every classic Hammer Film like The Quatermass Xperiment, The Curse of Frankenstein or Dracula, film historians and fans of the studio find themselves equally intrigued by the Hammer Films that never made it to the screen. These unmade films not only provide a number of intriguing 'what-if' scenarios for the history of the studio, but by providing new production and development contexts, can also offer us new insights into how Hammer operated at the height of its powers.

One of the earliest and most infamous unmade Hammer Films was Night Creatures,an adaptation of Richard Matheson's seminal novel I Am Legend, adapted into a screenplay for Hammer by Matheson himself in 1957. Hammer's regular clashes with the British censor are legendary, with films such as The Curse of Frankenstein and Dracula all keenly contested, and Hammer's The Curse of the Werewolf irrevocably altered by the censor's interference. However, Night Creatures was one of the few projects where Hammer failed to placate the censor, with the script by Matheson being dismissed outright. The rejection of Matheson's screenplay left Hammer with no choice but to cancel the film, but remnants of The Night Creatures still exist. Hammer sold the script to Robert Lippert, who produced the I Am Legend adaptation The Last Man on Earth in 1964. Hammer even made sure the title didn't go to waste, with The Night Creatures being used as the American title of Captain Clegg in 1962.

However, despite the censor scuppering Night Creatures, Hammer had a remarkably successful produced to unproduced ratio throughout the late 1950s and 1960s. It was not until the 1970s, with the American and British Film industry on the verge of collapse, that Hammer began to see some of it's more ambitious projects fall by the wayside.

In the early 1970s, Hammer began to realise that their gothic horror formula was no longer securing finance and distribution from increasingly risk-adverse American studios. As a result, Hammer's owner Michael Carreras embarked on a new, ambitious strategy, putting a number of large-scale multi-million dollar pictures into production, with the hope that their cross-market appeal and potential for international box office would make them more appealing to financiers. This strategy ultimately proved unsuccessful, but it led to a number of intriguing unmade prospects at Hammer.

Perhaps the apex of this strategy was Hammer's unmade Nessie, a proposed $7million monster movie which would have seen an irradiated Loch Ness Monster emerge from the Loch and terrorise international waters. The project was developed as a co-production between Hammer, Columbia and Toho Studios, who were to provide distribution in Japan as well as providing the special effects to bring Nessie to life. The project proved too ambitious for Hammer, with a big budget production proving unworkable for the company against the back-drop of a failing film industry.

The decline of the industry also put paid to Hammer's planned adaptation of the science fiction comic-book Vampirella. Another attempt at a big-budget production, the film got remarkably close to making it to the screen. Michael Carreras promoted the project in New York, taking stars Peter Cushing and Barbra Leigh to the Famous Monster Convention in November 1975 to promote the film. The Hammer Script Archive at De Montfort University even holds an expenses document that budgets the potential hotel expenses of the stars during production. Ultimately however the state of the film industry, as well as complex rights issues surrounding the character of Vampirella, meant the project never made it in front of the cameras.

These projects were all developed extensively at Hammer, with Night Creatures, Nessie and Vampirella all having screenplays, directors and stars attached. However, a project such as the intriguingly titled Zeppelins V Pterodactyls, where only a storyline and poster were produced, offers a number of other intriguing questions. Who would have starred? Who would have directed? How would the brief outline's plot be developed into a full screenplay? Although these questions will sadly remain hypothetical, the screenplay developed by Steven Sheil based on the outline, to be performed in a one-off script reading at Mayhem Festival, can at least offer us a tantalising glimpse behind the curtain of one of the greatest what-ifs in Hammer's history.

The full line-up and schedule is available at https://www.mayhemfilmfestival.com/tickets

With less than two months to go before the festival's 13th edition, we are proud to announce two new titles and a special event as part of their programme.

Building on the success of The Unquenchable Thirst of Dracula from the 2015 edition, Mayhem Film Festival will present a new live stage reading of an unmade Hammer production – the legendary Zeppelin vs Pterodactyls. Based on a thought-lost outline from the Hammer Scripts Archive, now faithfully expanded into a full-length script by Mayhem Co-Director, Steven Sheil (Mum & Dad, Dead Mine), Zeppelin vs Pterodactyls will take you on an epic sci-fi adventure to a lost world beyond the arctic snows where prehistoric creatures may still roam. If you couldn't attend the 2015 production, expect an immersive 'screenless cinema' experience with actors bringing the screenplay vividly to life. This one of a kind event is made possible with thanks to Hammer Films and CATH (Cinema and Television History) Research Centre at DeMontfort University.

In addition to this special live event, Mayhem is proud to announce two more films from their 2017 line-up, including Simeon Halligan's Habit. In this subversive film from the director of White Settlers, a young man working in a massage parlour discovers something dangerous and sinister lurking in the mysterious room no.9. Director Simeon Halligan will present the film and take part in a post-screening Q&A.

Wrapping up this second wave of announcements is Shudder's fittingly titled Mayhem, from American director Joe Lynch. Beyond the endless amusement of Mayhem screening at Mayhem, the film is a relentlessly fun corporate horror in which Derek Cho (Steven Yeun) finds himself trapped within the law firm he has just been fired from, as a super virus making people lose all of their inhibitions condemns the building to quarantine.

Mayhem Film Festival will take place at Broadway, Nottingham on 12-15 October 2017. Early Bird passes are still available for a limited time only at the discounted rate of £65.