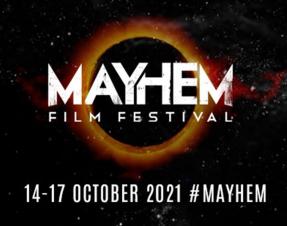 With just under one month to go until the doors open on another weekend of horror, sci-fi and cult cinema, Mayhem Film Festival has revealed the titles that will make up their popular Short Film Showcase screening on Saturday 16 October.

Featuring titles from across the world, this year's line-up includes the following films (in alphabetical order):

Due to social distancing measures, there are only a limited number of festival passes still available for this year's festival. Visit Broadway Cinema's website to book.

As the festival evolved from the original Short Film Showcase, short films have always been at the heart of Mayhem Film Festival and continue to be an opportunity to see up-and-coming directors and celebrate genre cinema.

Mayhem Film Festival returns this October with a feast of horror, sci-fi and cult titles from around the world and - after a quick sell-out of weekend passes in August - a limited number of additional passes for the weekend are now on sale.

We're kicking off on Thursday 14 October with our previously announced opening film, behind-the-scenes documentary Alien On Stage, in which an unlikely group of Dorset bus drivers put on a DIY production of Alien and take it to the West End stage.

Next up this year is underwater ghost story The Deep House - also already announced - which plunges us into the depths of a submerged haunted house for a literally immersive horror experience.

Up from the vaults, Mayhem opens its archive for the second day of the festival on Friday 15 October to resurrect a lesser-seen British horror film of yesteryear - a dark gem of Gothic cinema, 1949's Queen of Spades, in which a gambler becomes obsessed with an old lady, said to have sold her soul to the devil in order to win at cards.

Friday's line-up continues with The Show, a noir-fantasy set in Northampton, written by comics legend Alan Moore. Trippy, multi-layered and shot through with droll humour, The Show is an idiosyncratic delight.

We carry on into the evening with a smart and genuinely surprising sci-fi black comedy, Night Drive, which sees a ride-share driver's life begin to fall apart when he picks up his last passenger and accidentally hits a pedestrian.

Closing the Friday night of the festivalisSouth Korean cat-and-mouse thriller, Oh-Seung Kwon's Midnight. A serial-killing psychopath is interrupted in his latest crime by a young deaf woman - and so begins a non-stop, all-night, life-or-death chase packed with tension and twists.

We're starting Saturday 16 October off with an all-animated dark fantasy horror The Spine of Night, featuring the voices of Richard E. Grant and Lucy Lawless. A psychedelic, hallucinogenic epic of outrageous violence, ancient gods and courageous heroes set in a land of magic and mysticism, The Spine of Night is unlike anything we've ever screened.

Second on Saturday is a stylish, haunting and intense psychological portrait Knocking. A woman leaves a psychiatric ward and finds herself placed alone in a new apartment where she begins to hear mysterious knocking sounds.

Feed on the blood of fresh filmmaking talent with the return of the always-popular Mayhem Short Film Showcase on Saturday afternoon, presenting a selection of scary, weird and wonderful shorts from around the world and closer to home.

From the producers of The Gangster, The Cop, The Devil comes a new experience in action – the genre-bending, high-octane sci-fi thriller Spiritwalker. A man wakes up in a different body every twelve hours, each time forced to discover who he is - all the while being pursued by a secret organisation. He must find his way back into his real body before it's too late!

This year's Mayhem Midnight Movie on Saturday night is Brian De Palma's 1974 cult classic Phantom of the Paradise. Mixing the plots of The Phantom of the Opera and Faust, and adding a great score and cool songs, this is De Palma (Carrie, Blow Out) at his most stylish and stylised – a genuine midnight movie masterpiece.

We're starting off the final day of the festival on Sunday 17 October with the hilariously hyperactive satire Get the Hell Out, where Taiwan's parliament becomes a deadly battleground when a virus transforms politicians into bloodthirsty mutant zombies.

Fresh from winning rave reviews at its international premiere at Fantasia, there's hell to pay when a lonely teenager discovers her family's connections to witchcraft in occult coming-of-age story Hellbender, from the incredibly creative Adams family.

Later on Sunday is horroranthology The Night Shift. Looking for inspiration, an artist visits a run-down housing estate and interviews the building's caretaker, who has many strange and uncanny tales to tell…

In the penultimate slot for this year's festival is the unique Nordic folktale Lamb, a strange and daring debut from special effects master-turned-director Valdimar Jóhannsson. A childless couple discover a mysterious newborn on their remote farm in Iceland. Soon they're experiencing the joy of family – but before long, family will tear them apart.

We're closing Mayhem 2021 in style withthe must-see, one-take sci-fi comedy Beyond the Infinite Two Minutes. Tokyo café owner Kato returns home from work to find a message from his future self on his computer screen… and soon this strange phenomenon gets chaotically out of hand. Praised for its inventiveness by the creator of One Cut of the Dead - which went down a storm at Mayhem 2018 – it's sure to be a festival favourite this year.

Mayhem Film Festival announces THE DEEP HOUSE and ALIEN ON STAGE, and confirms plans for 2021 edition

With our 17th edition already fast approaching, Mayhem Film Festival is proud to announce the first two titles for our 2021 programme, and reveal our updated plans for this year's edition in light of ongoing restrictions.

Following last year's scaled-down Skeleton Edition of the festival, Mayhem is set to return to Broadway Cinema from 14-17 October, and we're currently working towards hosting a full-flesh, four-day edition for 2021. First up for this year's festival is underwater ghost story The Deep House. Reminiscent of that legendary moment from Dario Argento's Inferno, the directors of the extreme cinema, envelope-pushing Inside plunge us into the depths of a submerged haunted house to create a literally immersive horror experience.

Mayhem's second film confirmed for this year's edition is documentary Alien On Stage, following a group of DIY, Dorset-based bus drivers as they remake Ridley Scott's sci-fi classic Alien for the stage - all on a shoestring budget - and triumphantly take it to the West End stage. This behind-the-scenes documentary catalogues the journey from early rehearsals to opening night and will leave you grinning from ear to ear and cheering the underdogs on to victory.

Mayhem's always-popular perennial - the Short Film Showcase - will return for 2021 too.

Seating for this year's festival will be allocated to allow for social distancing, and so specific seats will need to be selected when purchasing festival passes. An initial limited release of full festival passes will go on sale week commencing 16 August, with more passes made available at a later date. We'll remain responsive to the ever-evolving pandemic situation and will make any required adjustments to our plans as necessary, and keep all passholders updated. Guidance will be continually reviewed in the run-up to this year's festival, and all screenings and events will be delivered in line with advised Government Covid-19 measures in place at the time.

Mayhem Film Festival will return this autumn to showcase the best in international horror, sci-fi and cult cinema, with the festival's 17th edition planned to run for four days from 14-17 October.

After last year hosting a slimmed-down 'Skeleton Edition' of the festival due to restrictions caused by the pandemic, organisers are hoping to move back towards the full flesh of the festival's traditional form for this year's edition, though the precise structure of the festival will remain responsive to events and any restrictions which may be in place in the autumn.

"We are very much hoping to return to a full festival at our home venue of Broadway in Nottingham, because nothing beats the full experience, but we are aware things are still evolving. Our main priority is for everyone, audiences and staff, to enjoy films in a safe environment so we're encouraging you to save the dates, but don't make plans to travel just yet. We'll continue to work with our friends at Broadway and follow government guidance in the next few months and hope to announce our exact plans in the early summer", says the team.

On the festival's return, Broadway's Marketing Director Stewart Terry says: "We're so excited to host Mayhem once again and we hope to do so in all its gory glory. The festival always brings people together at Broadway and we can't wait for them to not only enjoy some of the most exciting films from across the world, but also experience our refurbed venue."

In addition to announcing their 2021 dates, Mayhem Film Festival is also excited to open their call for short films for this year's edition. Over the years, Mayhem grew from a single short film programme to a four-day event, but its shorts programme remains at the heart of every edition. Mayhem Film Festival are looking for horror, sci-fi and cult short films, produced after 1 January 2020 and that are under 22-minute long. More information on how to submit films is available at https://filmfreeway.com/MayhemFilmFestival

In previous years, Mayhem has welcomed many filmmakers from around the world such as Gareth Edwards (Godzilla, Rogue One: A Star WarsStory) for Monsters,Mark Gatiss (The League of Gentlemen, Sherlock) for a special masterclass, Ben Wheatley for a preview screening of Sightseers, Nicolas Roeg for a special screening of Don't Look Now at St Mary's Church in Nottingham, and cult Canadian collective, Astron-6 for The Editor and The Void. Mayhem Film Festival has also hosted special events such as screenings with specially-commissioned live scores from 8MM Orchestra, two exclusive live stage reading of unmade Hammer Films screenplays, The Unquenchable Thirst of Dracula in 2015 and Zeppelin V. Pterodactyls in 2017, and a live performance of Tales of HP Lovecraft by The Duke St Workshop featuring British actor Laurence R. Harvey.